In 1868/71 the explorer Prof. Dr. Georg Schweinfurth noticed some strange looking hunting dogs in their natural habitat in the Niam Niam Camp in Central Africa, in the area Bahr-el-Ghazal.

The drawing „Pond at Diamvonu“ shows Basenjis in their natural habitat in the Niam Niam Camp after their discovery by Dr. Georg Schweinfurth. His report report and this drawing are the first reliable information about Basenjis in recent times.

Basenjis inhabit two different climate zones, the savannah and the rain forest. The coat of Basenjis differs according to climate conditions. Some Basenjis develop a thicker fur than those who do not need it. Through targeted breeding, these differences unfortunately and gradually getting lost.

Evergreen tropical forest developed on all continents on both sides of the equator up to 10. degree of latitude, but, mainly in South America and Oceania, also beyond that. The largest contiguous area is the Amazonas region; it covers about half of all tropical rain forest. Other large rain forest are found in the Congo Basin and Indonesia.   en.wikipedia.org/wiki/Ituri_Rainforest 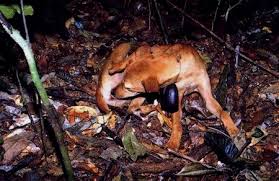 Natural environment is the Ituri Rainforest. The Rainforest is threatened.

Basenji search. Did you find the Basenjis and one puppy ?

Basenjis were used by men as helpers and during a hunt occasionally are fed some unwanted bits of meat. They have to be able to independently take care of their food and survival.

The dwarfs from the Congo   Pygmies   and Basenjis as hunting dogs

In 1956 obtained by Dr. Chapin from the pygmies of the Ituri Rainforest

1990 imported Schensi Basenjis from Togo of the Efe

Basenji and a herdsman

The breeding dog Basenji today worldwide in a new surrounding.

Basenjis have all instincts  very well compatible for their natural  homeland  in freedom. But they are not very well conformist to high tech civilization. Cars, streetcars and train are no danger in their mind. Basenji History

Give your Basenji a chance to learn being accustomed to our civilization.

He still can provide his own food and find anything edible; look out for poison and spoiled food.  Therefore it's so important to feed them appropriate natural food to the species. Basenjis learn very quickly to do what we want, but then often do  as they like, because they are independent dogs . Take it easy and don’t worry. Start very early by training your Basenji and be consequent. In his natural surrounding the basenji is not accustomed to stay alone because he live beneath the people in freedom. Give the Basenji a chance to learn to cope with modern civilization. These intelligent dog need mental training and a lot of exercise. You should like to learn the  basenji language, that makes the life with Basenjis easy going.

The world-famous Basenji expert Miss Veronica Tudor-Williams wrote an article (Journal of the Society for the Preservation of the Fauna of the Empire, Nr.54) on the Basenjis of Central Africa and called them a "living fossils". She wrote: "It would be a tragedy if these canines of such ancient lineage, having maintained their identity over numerous centuries, would now be lost to us forever as a consequence of expanding civilization".

I want to add, it is my concern that the Basenjis be not bred with purely optical fashionable or commercial goals in mind.  The first must for the breeder is to have the health in mind.

It is our opinion that the BASENJI is perfect since thousand of years. Basenji Personality

Fula of the Congo Africa Import